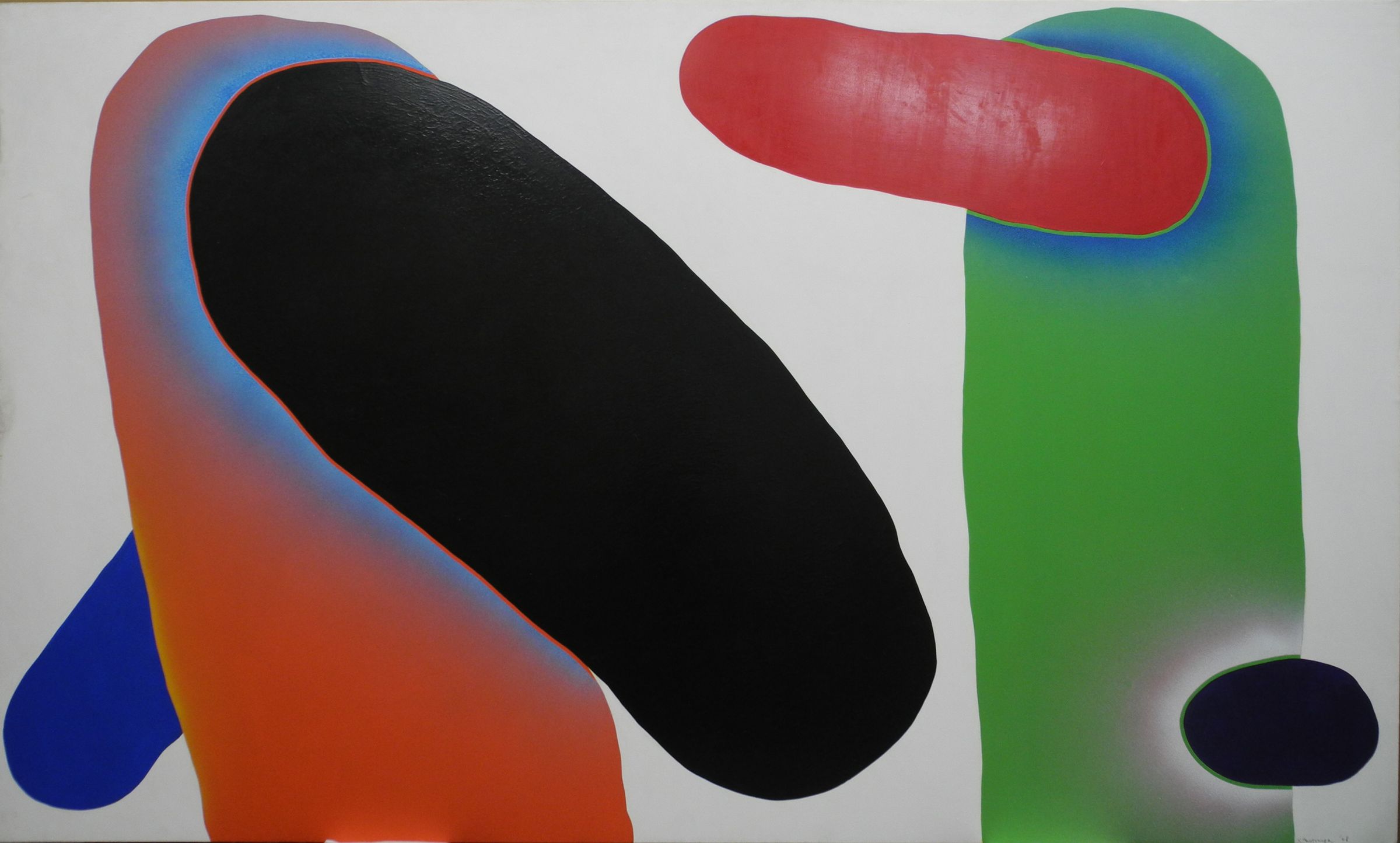 Born in 1922 in Mie Prefecture, Motonaga was a member of the legendary Gutai Art Association (1954–72), which became famous for groundbreaking performance works and innovations in painting, sculpture, and installation art. He emerged at a time when a post-atomic surrealist existentialism was at the forefront of artistic development in Japan. However, Motonaga chose a different path, turning his back on the destruction wrought by the war in order to create paintings, sculptures, and performances that were fresh, jubilant, and playful.

In 1954, he began employing a vocabulary of embryonic shapes, flying objects, and cartoon-like forms, modeled in heavy oil paint, that revealed his interest in children’s art, manga, and popular culture, and collapsed distinctions between high and low art. By 1957, Motonaga’s work had become more abstract and featured flowing lines and pools of brightly colored pigment poured and dripped onto the canvas. This “classic style,” which developed concurrently with Morris Louis’s Veil paintings, occupied Motonaga until the mid-1960s, when his anthropomorphic sensibility returned in paintings featuring extruded and knotted forms that were delicately modeled with airbrush.

Thereafter in the 1970s, the artist’s scratchy hand-drawn forms reappeared along with the use of canned spray paint, creating a style that was fresh and raw, akin to graffiti and animation. Motonaga occupied a unique position in the Japanese art world, creating a distinct visual continuity between the artists and imagery of the immediate postwar era and the concerns that emerged in the work of contemporary painters such as Takashi Murakami, Yoshitomo Nara, and beyond.

Motonaga was the recipient of several prizes, including, the Prize for Excellence at the 6th Contemporary Art Exhibition of Japan, 1964; Grand Prix from the Shincho Foundation and the Grand Prix at the 4th International Biennale Exhibition of Prints, Seoul, 1983; Medal of Chevalier of the Order of Arts and Letters, 1988; Osaka Art Prize, 1992; Kobe Shimbun Peace Prize, 1996; and the Culture Merit Award from the Mie Prefecture, 2002. He died in Kobe, Japan in 2011