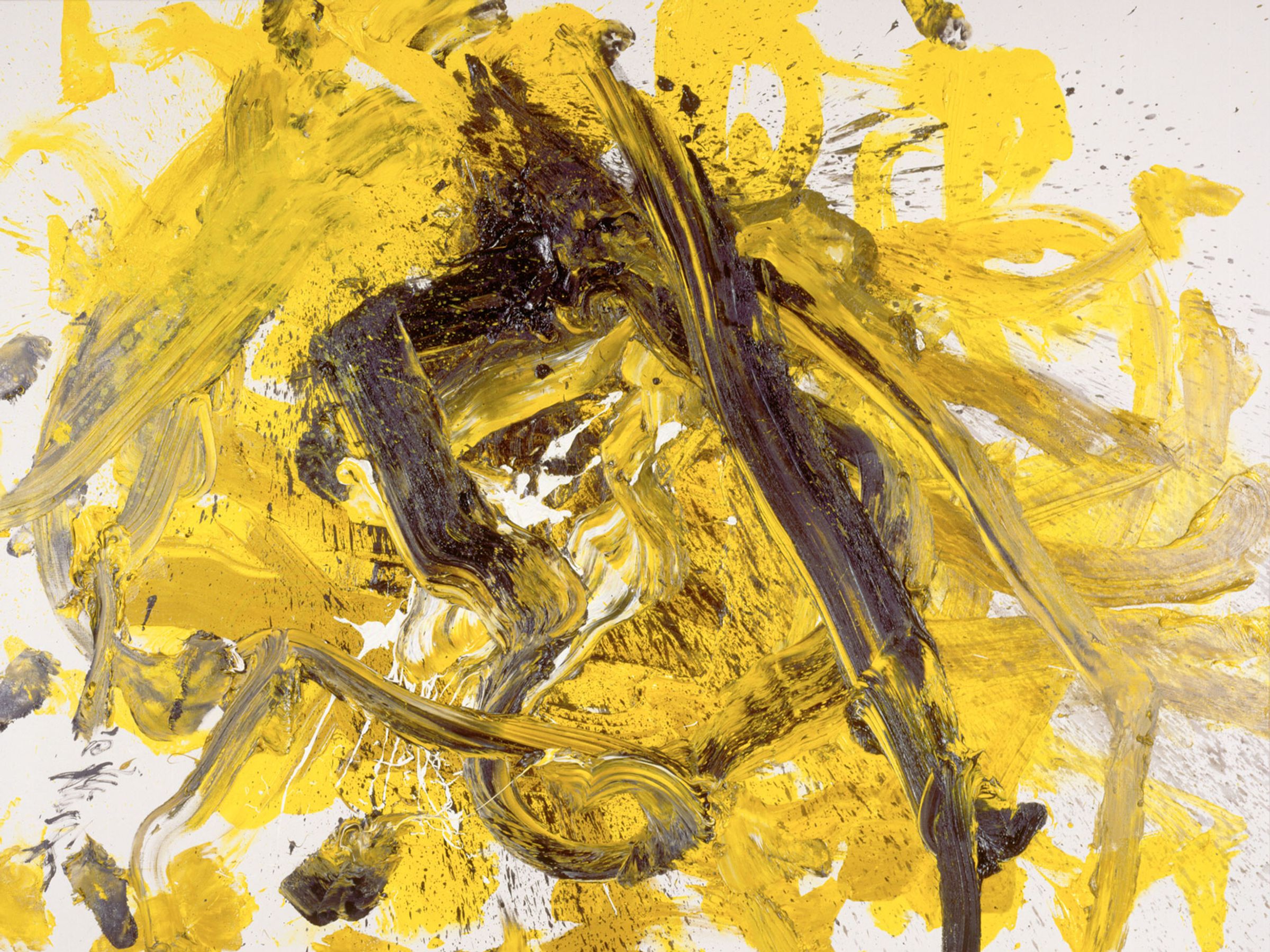 Kazuo Shiraga (1924–2008) was born in Amagasaki west of Osaka, in Hyogo prefecture, west Japan. Due to the insecurities of the war, including the scarcity of food and the danger of air raids, Shiraga was unable to move to Tokyo to study at the prestigious Tokyo School of Fine Art [Tokyo Nijutsu Gakkō; now Tokyo University of the Arts]. As an alternative, he enrolled at the Kyoto Municipal Special School of Painting [Kyoto Shiritsu Kaiga Senmon Gakkō; now Kyoto City University of Arts]. The school did not offer training in Western painting techniques [yōga], but only in traditional Japanese painting [nihonga]. During the time he spent at the school, Shiraga found the traditional Japanese disciplines restrictive and inhibiting to his freedom. After finishing his training, he gravitated towards Western art. In 1954 he founded the artists’ collective Zero-kai, together with Kanayama Akira, Murakami Saburō and Tanaka Keiko. In December 1954, this collective was invited to merge with another group, Gutai Bijutsu Kyōkai, in Osaka. The Gutai group was led by the more established artist Yoshihara Jirō. The core of the group consisted of the artists Murakami Saburō, Shimamoto Shōzō, Tanaka Atsuko, Kanayama Akira, Motonaga Sadamasa and Shiraga. The name Gutai is related to the Japanese word gutaiteki, meaning ‘concrete’, ‘specific’. The group’s objective was to create a new, unique art that had never been seen before. Yoshihara Jirō gave the group the task: “Never imitate others! Make something that has never existed!”

He wanted to initiate a new artistic movement.

Shiraga’s art is physical and masculine. His pictures are often large, thus conveying a clear sense of the activity involved in their making. Each picture is the result of a performance. In his studio, Shiraga danced while suspended from a rope. His entire artistic output illustrates his physical vigour. His work effuses an impression of health. The painting process was rapid, and the pictures reflect the artist’s exertions and stamina. An artist’s collective output is often described as his works. In Shiraga’s case, this designation takes on a further dimension, in that his works are also the product of very real physical work. It is almost as if one can hear Shiraga catching his breath in his paintings. Shiraga himself once said, “I want to paint as though rushing around a battlefield, exerting myself to collapse from exhaustion.” This attitude was perhaps most evident in his famous performance Challenging Mud (1955). The Japanese word saigō can be translated as ‘sin’, or it can denote a sinful action and bad karma. Recalling Shiraga’s background as a Buddhist monk, it is tempting to view this in conjunction with the physical work involved in creating the picture. Saigō was painted in 2000 and comes across as an inferno of red. Shiraga’s late paintings are full of striking vitality and freshness. But at the time it was painted, the artist was 76 years old. His age must have affected the way he approached his work. With such a demanding working method, it is reasonable to assume he reflected on his own mortality and karma.