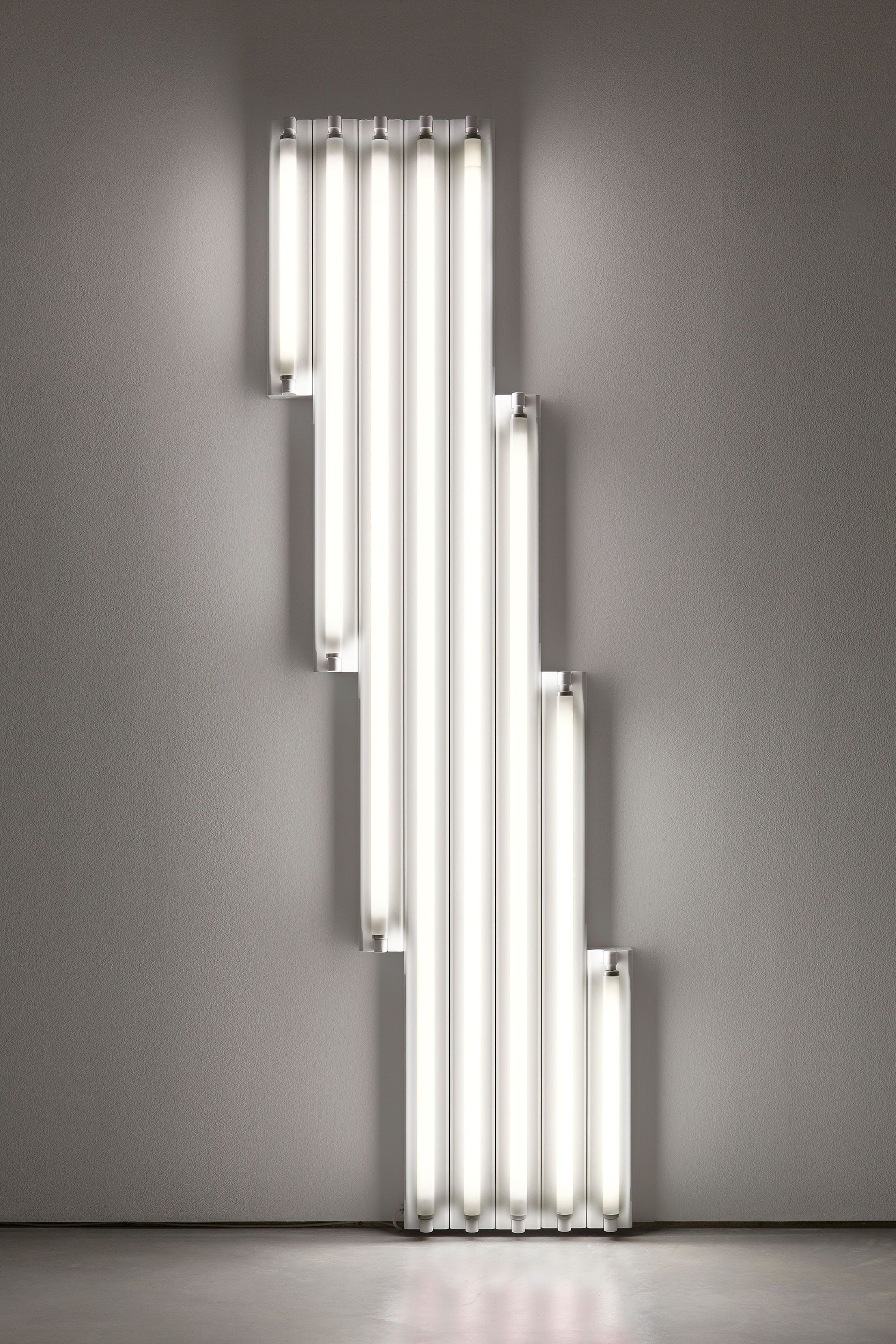 Dan Flavin (1933-1996) produced a singularly consistent and prodigious body of work that utilized commercially-available fluorescent lamps to create installations, or “situations” as he preferred to call them, of light and color. Through the construction of light, Flavin was able to literally establish and redefine space. A major permanent installation of the artist’s work can be found in Marfa, Texas, and another long-term installation can be seen in Bridgehampton, New York, where in 1983 Flavin began renovating a former firehouse and church to permanently house several of his works and to serve as an exhibition space and printmaking facility for local artists. The building was named the Dan Flavin Art Institute, and is maintained by the Dia Art Foundation.

Flavin`s work was included in a number of key early exhibitions of Minimal art in the 1960s, among them Black, White, and Gray (Wadsworth Athenaeum Museum of Art, Hartford, Connecticut, 1964); Primary Structures (The Jewish Museum, New York, 1966); and Minimal Art (Gemeentemuseum, The Hague, 1968). Flavin’s work would continue to be presented internationally over the course of the pursuant decades at such venues as the Saint Louis Art Museum, Saint Louis, Missouri (1973); Kunsthalle Basel, Basel; Museum Boymans Van Beuningen, Rotterdam (both 1975); Stedelijk Museum, Amsterdam (1986); and the Solomon R. Guggenheim Museum, New York (1992), among others. A major museum retrospective devoted to Flavin’s work was organized, in cooperation with the Estate of Dan Flavin, by the Dia Art Foundation in association with the National Gallery of Art, Washington, D.C., where it was first on view in 2004. The exhibition traveled from 2005 to 2007 to the Modern Art Museum of Fort Worth, Fort Worth; Museum of Contemporary Art, Chicago; Hayward Gallery, London; Musée d’Art Moderne de la Ville de Paris, Paris; Bayerische Staatsgemäldesammlungen, Pinakothek der Moderne, Munich; and the Los Angeles County Museum of Art, Los Angeles. In 2012, the Morgan Library and Museum, New York, presented a retrospective of the artist’s drawings and, in 2012-13, a retrospective exhibition of the artist’s work traveled from the Museum Moderner Kunst Stiftung Ludwig, Vienna, to the Kunstmuseum St. Gallen, Switzerland. In 2013-14, the exhibition Artist Rooms: Dan Flavin traveled from the Tate Modern, London, to Gracefield Arts Centre, Dumfries, Scotland. In 2016, Ikon Gallery, Birmingham, UK presented Dan Flavin: It is what it is and it ain’t nothing else.